Cari Amici (Dear Friends),
Today was one of those days that caught me “with my pants down.” I mean that figuratively, of course! That means that I regret not having my good camera with me because today I received a surprise invitation and it would have been wonderful if I had not left the house nude this morning (without camera). I did have my little Nikon, but that is a POS [Piece Of S...] camera, and hardly worth the effort (read WORST PURCHASE EVER!)

Upon arriving in the studio this morning, the Maestro John Angel asked me if I would mind spending my lunch hour at a publicity event with the Sindaco di Firenze (Mayor of Florence, Italy), Matteo Renzi, that John, Lynne Barton (owner of the Angel Academy), Anna, and Jered were invited to attend. He had his good camera with him and likes the photos I take.

Today, 22 February 2012, is the 500th anniversary of the death of Amerigo Vespucci, whose name appears on two continents. Vespucci was a Florentine and Florence wants to celebrate this year with Americans through a variety of activities. The three main classical art schools in Florence (Angel Academy of Art, Florence Academy, and Charles Cecil Studios) that use English as the primary language in school are involved in celebrating the arts for this occasion. I am sure that I will write more about this as the year progresses.

In this first image, the Angel crew (Anna, Jered, Lynne, and John) are meeting up with Charles Cecil (right) at the entrance courtyard of the Palazzo Vecchio, which I had just visited in my last blog post. 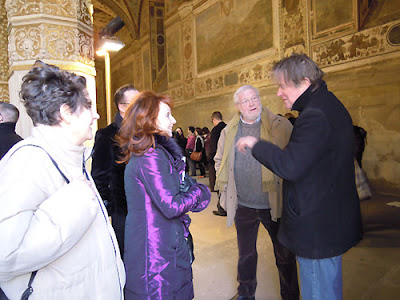 The unveiling ceremony (which is what this turned out to be) was held in the Palazzo Vecchio’s Sala dei Gigli (Hall of Lilies), named in honor of the French, who have historically been defenders of Florentine freedom. [The Florentine fleur di lis has two extra stamen in its design, which otherwise closely resembles the French symbol.] You will see this French symbol in gold with a blue background on the walls of this room. Those are also there because much of the commissioned art back in the late 1400s was never completed by the same artists who had recently finished commissions on the Sistine Chapel in Roma. 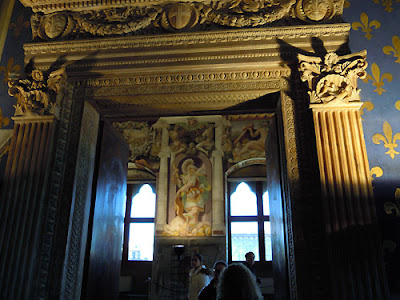 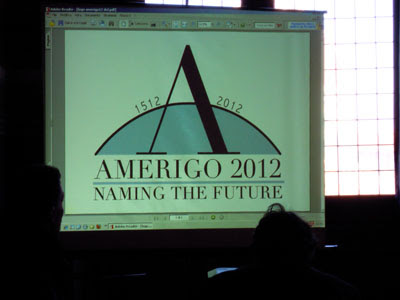 Mayor Matteo Renzi . . . as a street painter, I am not sure what I am supposed to think of some of his actions… but then, in all honesty, other than his diverting traffic to the street on which I work on my hands and knees (see my book for more on this), I do not really know the full details of the struggles of the madonnari. I MUST learn more of the Italian language! 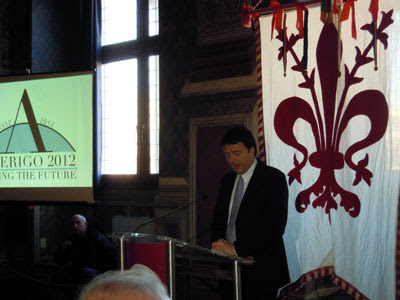 In this snapshot of the crowd, you might be able to pick out on the third row back: John Angel, Lynne Barton, Anna, and Jered Woznicki. In the row behind that, from the left: Charles Cecil and Sandro Zecchi. 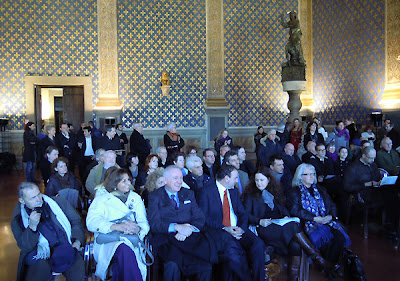 This next shot is of the map that the three girls in Renaissance costumes and dolled-up hair unveiled. I must admit daydreaming through most of the several speeches, and not understanding the rest. However, I was told that the map of the world was actually purchased by Vespucci in 1424 from the Chinese! I cannot verify that at this moment, but I can simply leave you with the curiosity of the cat… 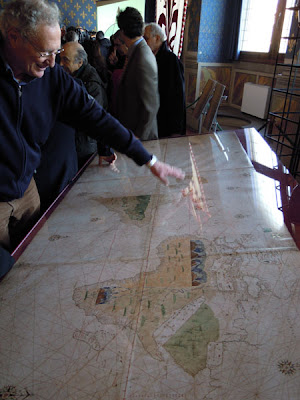 And finally, I was so thrilled to have been invited to such a cool thing and was thinking that it would be nice for me to have a photo of me with the Angel staff in this Palace. At the same time, it dawned on me that the reason I had lost the mayor was because his back was sitting right in front of me! He had taken the chair of the current speaker! I looked around for someone to use my camera to take a shot of me with him. One woman nearby was too enraptured by her phone and next thing I knew, a tall Italian man with an enormous press camera offered to take the shot for me. Ironically, the mayor’s eyes were closed in each one … so I leave you tonight with this image of us (with John Angel behind us) in the Hall of Lilies. 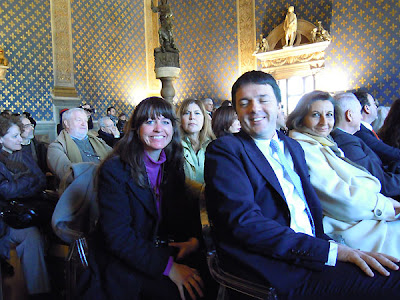 Posted by Kelly Borsheim Artist at 8:24 AM

Kelly you are moving to the Center of the World of Art. Congrats to you. Imagine what good ol Amerigo would say.

haha .. .thank you, Gene. Life is so fast paced in this laid back country! Makes my head spin, and yet... not feeling very productive. I must make that change...
ciao bello!
Kelly