Maybe this was a case of “it tells more about you (the viewer) than about me (the artist).” Maybe it was because I was standing in a very beautiful space (the Belvedere in Vienna) and was feeling a little bit of “information overload.” Or maybe it was that I had just come from the Leopold Museum and was feeling a bit sad to learn that Austrian artist Egon Schiele had died in 1918 in the huge flu epidemic. He was only 28 and his wife, 6-months pregnant, had succumbed to the same flu three days before her husband.

In any event, I did not have the emotional reaction to “The Kiss” by Gustav Klimt that I thought I would when I saw the real painting in person. The images that I include here do not match the memory I have of the actual painting. 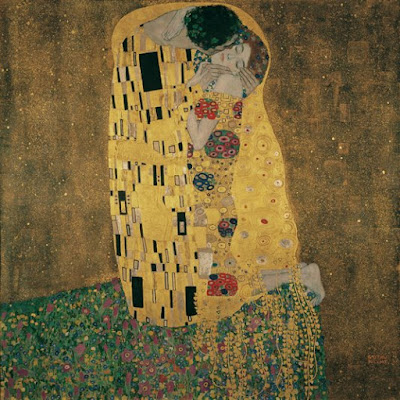 To me, the face of the woman looked bluer than her arms, the color warming slightly as it moved away from her face. I looked closely at the hands. His were decidedly strong and straight, like architecture: supporting more than caressing her. Hers were not limp and seemed to reciprocate the embrace, although the hand on his neck was questionable. It appeared to be only resting there after some movement, but not that she was consciously touching the skin on his neck.

But still, for me . . . that face . . . Before Vienna, I had only assumed that she was accepting and enjoying the kiss of her lover. But as I stood before the original painting, I had the distinct impression that she had just died. As the life color cascaded down from her face, her lover kissed her for the last time. I could not shake the sadness that I felt and yet, there was such a great beauty in the artwork. 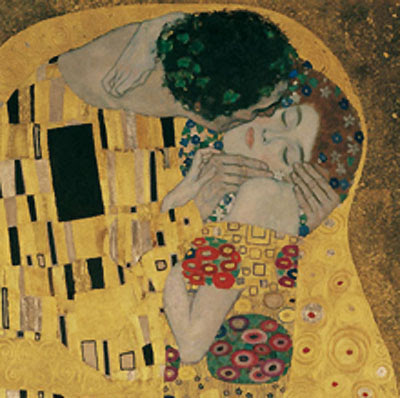 What an insightful commentary. Whether quick or dead, she does not seem to be responding. Perhaps has to do with the mores at the time it was painted... women were expected to be passive.
(I'd always noticed the colorful patterns more than the figures.)

Stood in front of the kiss yesterday and tried to feel my response. after a long time i could feel something but a good painting should give you an immediate reaction otherwise you are not emoting instinctively. Did love the environment and saw some very emotive work. the kiss was missing something!!