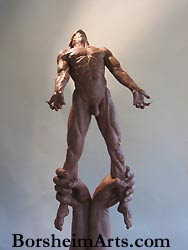 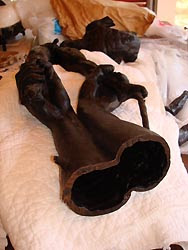 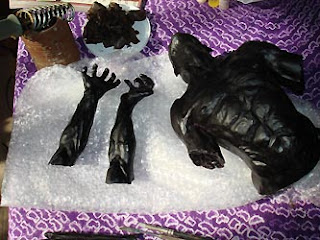 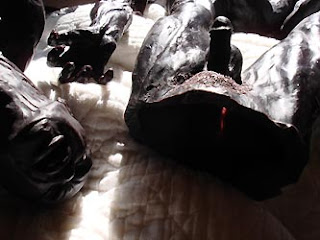 I received a wonderful gift this month. A new collector with a vision and trust is helping me to realize one of my most personal artworks in bronze. I first created “Against the Dying of the Light” in 2001. I originally sculpted most of the clay in a week in my Texas studio and then later added the large hands at night at my site at the MARBLE/marble Symposium in Colorado. After I returned to Texas that summer, I hired several different models to assist me in getting details such as the veins in the arms and, as I told one model Todd, “quads like diamonds.”

For various reasons, this sculpture was put on hold and finally finished in 2005. Then in August 2007, a mold was made. While I had received wonderful comments and several inquiries about this sculpture, it was only while I was in Italy this past fall, that a serious collector contacted me. So my foundry created the wax from my mold in time for me to arrive back in Texas and work the waxes that will later become bronze.

For those unfamiliar with the bronze casting process, most bronzes are created hollow, like a chocolate bunny. Smaller pieces can be cast solid, but if very thick, that is not practical. Not only because of the ever-increasing price of the metal, but mostly because of the chemistry of cooling molten metal. Bronze is poured into a mold when it is around 2000 degrees hot – after the metal has become a beautiful liquid. Thin sections cool faster than thick sections, and this unevenness, if you will, causes problems in “shrinkage.”

In the case of “Against the Dying of the Light,” the arms will be cast separately, and solid. The upper body will be cast hollow, but as its own piece. And the hips and legs of the figure will be cast as one hollow piece with the large hands. After the sculpture has been cast into bronze, the parts will be welded together and then “chased,” resculpting details in the metal where all the connected parts require it. Then I will add the patina and carve the stone base.

Here you see my original work in plastilina (an oil-based clay) and later the wax pieces that my foundry poured from the mold that was made from the plastilina original. I am spending this week “chasing the wax” or removing mold lines, bubbles or holes in the wax, and checking that every detail is true to my original idea. The first step I do is examine the wax and thicken thin parts. My goal is to have a wax of consistent thickness, to minimize the effects of bronze shrinkage after the pour. It is difficult to pour a hollow figure, and often (internally) protruding parts (receding parts in the outer surface) must be reinforced from the inside. (One image shows how transparent the wax looks in the crotch area of the figure. I can clearly see where the wax is too thin.)

I will finish these waxes and return them to the bronze casting foundry before I return to Italia soon. I cannot wait to see “Against the Dying of the Light” in bronze!
Posted by Kelly Borsheim Artist at 7:44 AM

The first things I cast were a half dozen each of three different life sized rabbits at Shidoni foundry in Santa Fe.
They did everything from start to finish, did a great job, but I'm still reeling from the cost nearly 2 years later.
Then, when I needed to replace some I let another guy do the waxes and shop them around for prices to cast.
Surprisingly Shidoni were able to do 3 on one cup for a good price, instead of one per cup for a much more expensive price like before.
I was not too smart to let myself get taken like that the first time (although they did do a good job), but I'm poorer and wiser now.