The current exhibition at The Ukrainian Institute of Modern Art (UIMA) is of the private collection of the late Bohdan Kowalsky.. The art collections consists of paintings, sculptures, lithographs, wood cuts and drawings by Polish, Ukrainian and Ukrainian-American artists, such as Archipenko, Nowosielski, Gritchenko, Trusz, Hnizdovsky, Solovij, Milonadis, Urban and many others. His collection was bequeathed to UIMA in 2008.

Two of my favorite artworks were bronze figurative sculptures by Gregor Kruk (1911-1988). Although he had a third sculpture there, it was simply a reclining female nude and did not interest me much. However, the two sculptures I show you here were lively and emotional pieces of art and I very much appreciated their honesty and expression. 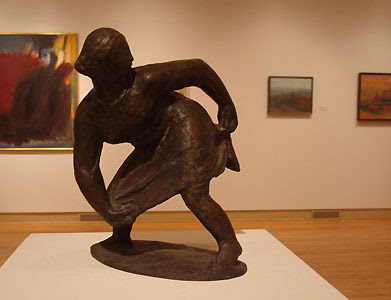 The first one is “Untitled (Female Figure with Dress)” from around the 1960s. The second “Untitled (Standing Male Figure)” from 1962. I include an image that my friend Dilbarra took of me with the sculpture of Gregor Kruk to give you a better idea of the size of these gems. 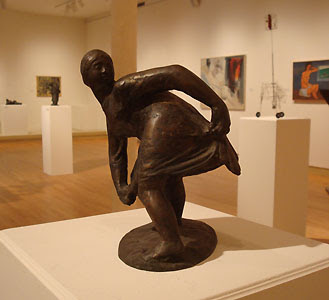 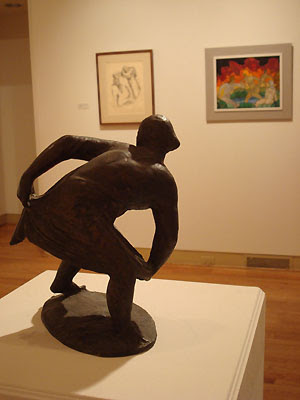 According to a page on the site of the Association of Ukrainians in Great Britain:
“After the end of the Second World War Kruk settled in Munich where he composed sculptures in bronze, clay and stone featuring (mainly) figures of peasants, kozaks, working women, bandura players and dancers. Though his works were exhibited in cities across Western Europe and the North American continent, Kruk’s main dream was to have his works displayed in Ukraine.”
There is also a photo of the artist at work at the link above. 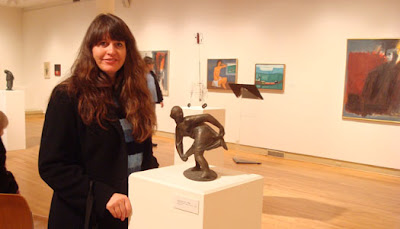 Here is an interesting article on the life and journey of the collector Bohdan Kowalsky.. I especially found interesting the World War II statistic that of the 11,000 soldiers in a Ukrainian division advancing towards the Russian Army, only 3,000 made it through. Get the details yourself by clicking on the link above.

Happy Birthday to my Uncle George and my cousin Jessica 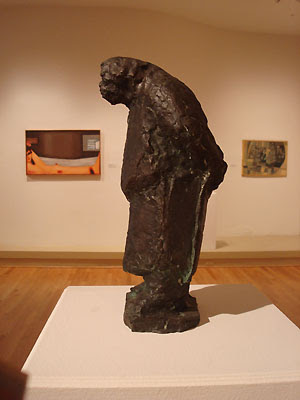 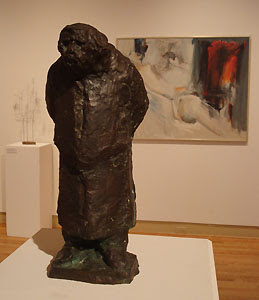 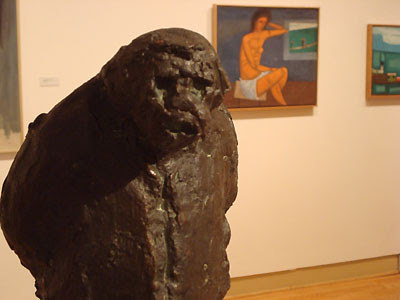 I have written before about the importance of viewing distances in art. Whether it is sculpture or one of those well-designed perspective drawings that you have probably seen via the Internet if not in person on the street (or other “3-d” artworks in a 2-d format), the position of the viewer can make or break the impression the art gives. But even in “normal” paintings, this distance from the artwork changes our perceptions and sometimes emotions when experiencing a work of art.

I have heard it said that gallerists can tell when a visitor is an artist vs. a collector (or perhaps wearing one hat or another because artists can be collectors too!). The collector tends to allow a single or few works grab his attention, paying little heed to the others in the room. The artist examines every single work, most often moving up close to see each stroke.

Today, I am wearing my artist cap (or should I say beret?). Here are two more landscape paintings that I saw at The Ukrainian Institute of Modern Art recently. This first “Untitled” oil on board was painted in 1963 by Ukrainian artist Mykola Bidniak (1930-2000). The detail image (particolare in Italian) appears first. 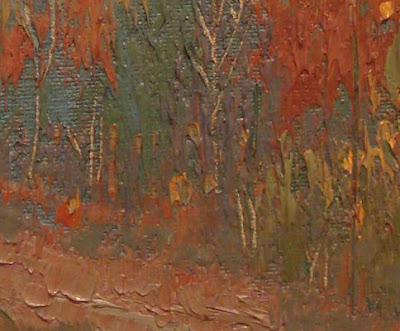 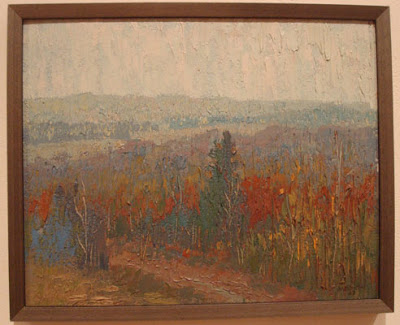 This second painting is by another Ukrainian artist, Petro Kholodny (1876-1930). His untitled landscape was painted (oil on board) in 1927. Odd that my choice here happened to be of two landscape artists whose lives perhaps never touched, the one dying in the same year that the other was born. 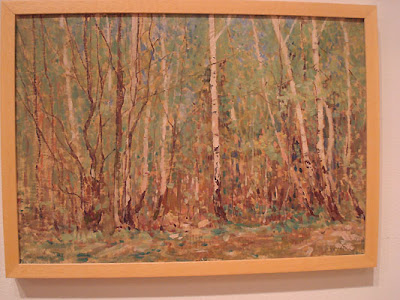 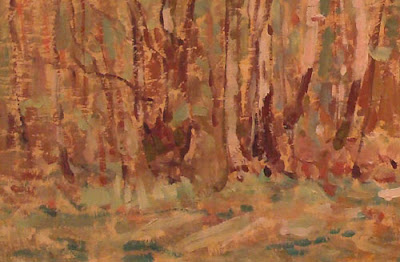 And finally, this last painting has little to do with this post other than I wanted to show it to you. It was also a part of the exhibit (although part of the permanent collection) at The Ukrainian Institute of Modern Art. I looked at “Traffic” up close and later from across the room. It gave me a headache wherever I stood, regardless of viewing angle or distance. However, I had to admit that this 1948 oil painting by Harold Hayden truly captures the agitation and confusion often felt when people start crowding one another. “Traffic” did impress me that I felt this uncomfortable-ness from everywhere in the room whenever I placed my eyes on it. 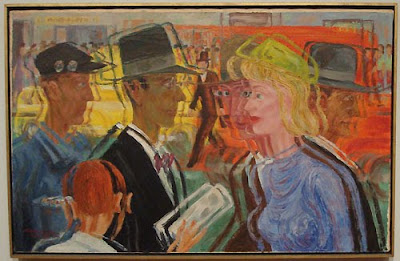 Posted by Kelly Borsheim Artist at 7:39 AM No comments:

After I left London, I flew to Chicago to spend the weekend with my friend Dilbarra Arapova before returning to Texas. She is the wife of my friend and mentor, sculptor Vasily Fedorouk.

We had a good visit and a bit productive despite the brevity of it. Dilbarra took me with another friend to The Ukrainian Institute of Modern Art in the Ukrainian Village of Chicago.

I saw there two works by Ukrainian-born American artist Alexander Archipenko (1887-1964), one of Vasily’s favorite artists. This first is titled “La Coquette (1950),” a lithograph on paper. The second lithograph is simply titled “Two Figures, 1921.” 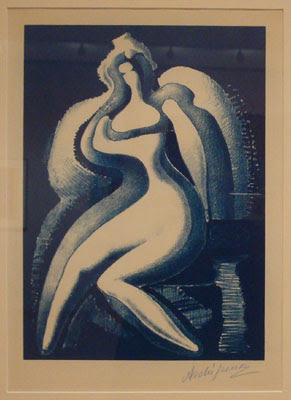 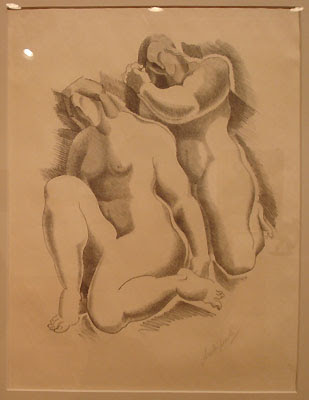 Here are a few shots of the museum environment. More to come next time . . .