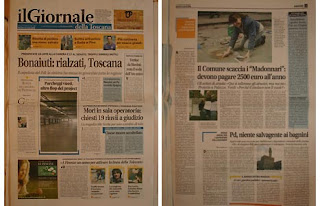 Whew hoo! How cool is this? (scusami, self-indulgent moment coming up . . .)
My mug shot and name made today’s newspapers in Italy!!! There is a small teaser photo on the bottom of the front page of the 11 March edition of “Il Giornale della Toscana” and then a rather large image of me starting my drawing of Caravaggio’s ‘St. John the Baptist as a Youth (with ram)’. Yup, just what every girl needs – a photo in the paper of her working on her knees.

The article on page 11 is rather long and takes up more than half of the page. The images and text came from giornalista Fabrizio Boschi of “Il Giornale della Toscana” and is about the new plight of the madonnari (street painters) after the law regarding Street Art was changed in January. 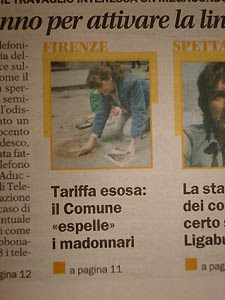 A VERY Rough Translation:
On the left one "Florentine Madonnara", Kelly Borsheim, 43 years, originally of Texas. She has been in Florence for a year and half, but now for her, like for her colleagues, they see hard times. She is also a sculptor of marble and bronze: one true artist to all round. The Madonnari are artists of the street, therefore called from the images, above all sacred and mainly Madonne, that they are usual to draw for the street. 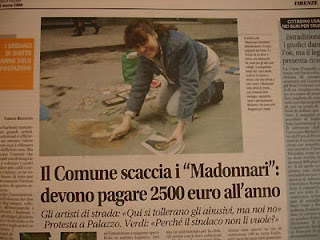 Signor Boschi’s article told about the work of the madonnari and also about the increase in the tax or permit fees for the street painting organization. Claudio Sgobino is the leader of the Madonnari and he chained himself to the Neptune fountain in Piazza della Signoria on Monday 10 March in protest to the large fee hike. Claudio has been in Florence for 20 years, but has worked as a madonnaro for 23 years.

Then late in the day, my friend Lisa O’Neil sent me a text message that she also found me in a group shot with the madonnari in the Metro paper. The image below was located in the Metro on pagina 7 and was taken by the journalist in front of the Palazzo Vecchio. I am standing on the left – wearing pants, no less! 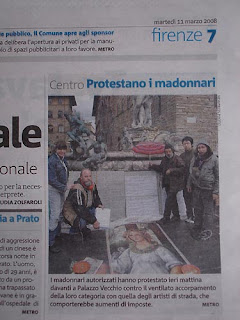 So, let us see what kind of changes might be had after Claudio’s publicity campaign.
Posted by Kelly Borsheim Artist at 8:01 AM 2 comments:

Caravaggio in the Rain

Today I tried to work as a madonnara on Via Calimala in Florence, Italy. I arrived around 13:30, after my work with model Valentina. Not a good day for making a drawing or earning some euros – it was raining off and on, and then later, just on. 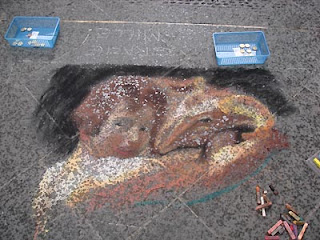 My project for today was to copy Caravaggio’s “St John the Baptist as a Youth with Ram” I really did not get very far – maybe 30 minutes into it since two vans were parked over the square that my permit allows me to paint in. The polizia found the drivers (who also had permits to park within the city during the day), but asked if I minded waiting until after they finished lunch before they moved their vans.

In the meantime, Claudio and Laura (two Florentines who run the madonnari organization, asked me to walk over to Piazza della Signoria at 15:00 for a photoshoot with some journalists who wanted to help publicize Claudio’s strike against freedom of expression. When I returned, I took the photo you see here. Funny that the glare from some of the raindrops makes it look like the whites of the boy saint’s eyes are really glowing!

(Prior to the scheduled photo shoot, giornalista Fabrizio Boschi of “Il Giornale della Toscana” interviewed me in my drawing square, even taking photos of me creating il mio disegno brutto. I laughed when he asked me my age. It reminded me of my first experiences in Italia in 2004 – after establishing my nationality, the men I met in the piazze always wanted to know my age. I was still of the school in which one does not ask a woman her age, and was curiously amused instead of offended by this behaviour.) 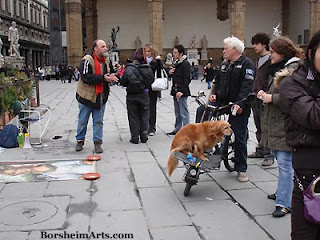 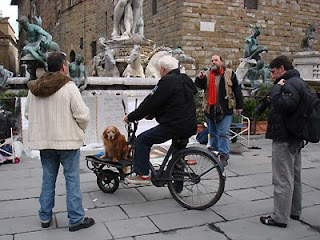 These next two shots were taken in Florence’s Piazza della Signoria. Claudio is the chained protester / founder of the madonnari and is seen wearing a red scarf. I just loved this doggie bicycle that one of our audience members had with him. While I hate the dog poo that litters this lovely old city, the dogs here rarely seem interested in biting any stranger who gets close. This one seemed especially sweet. 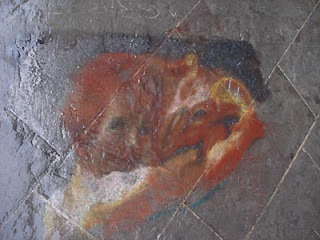 Then this last image is what I returned to find after my publicity efforts. It was interesting to me how much red remained (especially after yesterday’s blog entry about the Slaughtering of the Lambs. I get frustrated sometimes at the pastel kits I have bought for this job. I never seem to have enough dark colors. This image may look weirder than expected because the top is actually seen here on the bottom. I flipped the image, after needing to take it from the angle that gave me the least amount of glare from the rain-wetting street.

Anyway, I poured my water on the soaked chalk and grabbed my broom for extra scrubbing. Perhaps tomorrow’s artist will have less rain.

Thank you for reading!
Kelly
Posted by Kelly Borsheim Artist at 11:39 PM 1 comment: 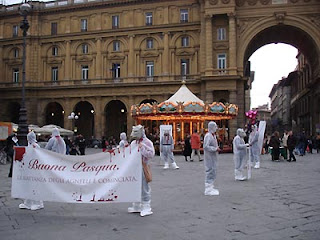 Cari Amici,
Today in Piazza della Repubblica in Florence, Italy, there was a demonstration to try to keep people from killing lambs for Easter dinner. 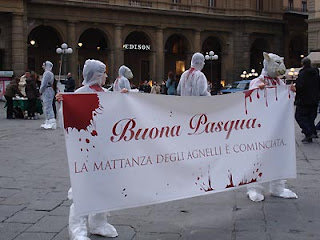 Buona Pasqua and La Mattanza degli agnelli è cominciata. which translates roughly to “Happy Easter” and “The Madness of the lambs has begun.”

That last translation was a guess on my part. My dictionary says that matto means ‘crazy’ or ‘mad’, so I thinkMattanza means ‘madness.’

For more information, you can check out the site for the Italian Campaign for the Animals: www.campagneperglianimali.org 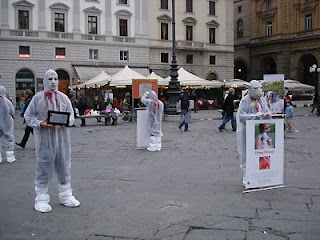 Happy International Woman’s Day! We do not celebrate this in the States, but my Ukrainian friend and sculptor Vasily Fedorouk introduced this holiday to me years ago and it is known here in Italia as well.

Ma, if you have been reading some of my blog entries, you might remember that I occasionally work as a madonnari (street painter -- arts) here in Florence, Italy. Today there was an organized demonstration on Via Calimala where we draw each day.
Before January, the madonnari paid the government 300 euros per year for permission to draw in three spaces on this street. But in January 2008, the law for Street Art changed and we now must pay 695 euros every three months. That is quite a hike! Also, after 31 March, we do not know if we will be able to draw anymore in these spaces.

So, yes, that is me that you see wearing a chain around my leg with some of the other madonnari. My friend Inga took that image shortly after the press came. I am hoping to find my image along with my new friends in the Corriere Della Sera paper tomorrow. That would be pretty cool, si?

We were collecting signatures to be able to try to show the government that people support the art efforts of the madonnari – and anyone can sign. But, it is apparent to me that my speech needs to get better. One man made a bit of fun of me because I could not understand the language he spoke to my friend Laura, a native Florentine. But I understood about half. Speaking and understanding are two different things and my speech was far too awkward to describe to Italians what I wanted and why. Most were kind and grasped what I was trying to communicate. And, hey, I was better with the English-speaking viewers!

This last image is of my friends Inga and Abdu, who joined in the later drawing. Tomorrow they will continue in our demonstrazione in Piazza della Signoria. Wish us luck!!
Posted by Kelly Borsheim Artist at 12:49 AM 2 comments: