I began to tell you of my sight-size drawing method progetto of the male écorché. Let me also explain that since my paper is smaller than the plaster cast that I am drawing, I have moved my easel forward to align the vertical placements of the original figure with where I desire to draw my figure. You may also note that I used a level to insure that the easel and drawing board are vertical.

I begin my drawing from a distance – the same spot marked on the floor so that my viewpoint is always the same (be careful not to wear high heels one day and flats the next!). I study, look, and visually choose the position on the paper that I wish to make my mark. Then I advance and draw on the paper, immediately retreating to my same viewpoint to see if I have made the drawing accurate. This is a slow process, because I do this starting with every height and width, often using a knitting needle in my fully extended arm to measure the original and compare to my marks on the paper. 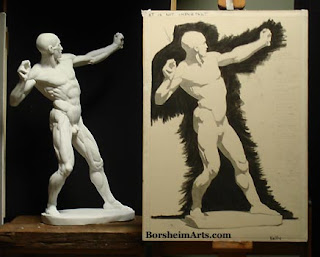 In this photo, you can see that I have drawn the outline of the figure, as well as the shapes of the shadow areas. I must decide what is in shadow and what is in light. The lightest part in shadow will always be darker than the darkest area of the lights. This drawing process helps me to never lose my form, which is determined by tone (and edges). After creating the line drawing of the figure and shadow shapes, I then make all of the background near the figure dark. Then I can see more clearly all of the errors in my shapes. For example, the straight arm is way too thick. More to follow . . .
Posted by Kelly Borsheim Artist at 11:14 AM 1 comment: 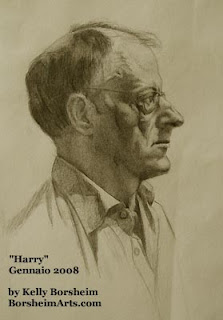 I hope you have enjoyed this last day in Gennaio. Here is the follow-up image of the now finished portrait of my friend Harry that I mentioned in a previous blog and showed you the work-in-progress. 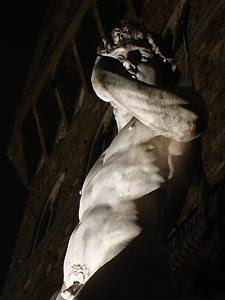 Arguably the most famous sculpture in the world, Michelangelo’s ‘David’ may be moving. While Florence is trying to manage high traffic in her central historical district, there are some people considering whether or not to move the large tourist attraction outside of the Accademia and the city center. (Pictured here is the fake ‘David’ that is exhibited in Piazza della Signoria.) Read more at:

Another article I found via artsjournal.com discussed Michelangelo’s drive to be the best and conceal his efforts while becoming this (by burning most of his drawings). It is a good article, and here are a few of my favorite highlights:

The critic Waldemar Januszczak, who had the chance to scrutinise the [Sistine] ceiling from close quarters from the top of a television scaffold, wrote: "I could see the bristles from his brushes caught in the paint, and the mucky thumbprints he'd left along the margins. The first thing that impressed me was his speed. Michelangelo worked at Schumacher pace. Adam's famous little penis was captured with a single brushstroke: a flick of the wrist, and the first man had his manhood."

. . .
Before he dipped the brush in the paint and set to work on his God and Christ, his Adam and Mary and all the rest, how did Michelangelo prepare himself? We know that, unlike his peers and predecessors, he did not use cartoons to transfer existing designs directly on to the wet plaster, because there are no the telltale peg marks left in the plaster's surface. We know that in some cases he worked from small drawings because a grid can be discerned over the finished work, indicating that he upscaled from a smaller sketch.

But what the norm for his preparation was we simply don't know – because Michelangelo didn't want us to know. Throughout his life he hated showing drawings to outsiders. Vasari claimed that this was because they revealed the endless effort he expended in reaching the perfection at which he aimed. Though he was dependent, like all Renaissance artists, on the patronage of the powerful, even men like Cosimo I were unable to get him to part with a single drawing. Before moving from Rome to Florence in 1518, he burned all the drawings in his house in Rome. Another terrible bonfire took place, on his instructions, at his death. Even Michelangelo's closest friends possessed only a tiny number of drawings, all of them highly finished.

. . .
Then, even while the agonies of the tragic tomb continued to pile up, [Pope] Julius threw another amazing job at Michelangelo. The walls of the Sistine Chapel, the private chapel of the papal household, were already adorned with works by 15th-century masters including Botticelli and Perugino. The ceiling was painted blue, dotted with gold stars. The chapel had long been in disuse because of a large crack in the ceiling. Now Julius wanted it to be drastically renovated, and commanded him to paint 12 large figures of the Apostles on the ceiling.

Imagine the Sistine Chapel ceiling looking like a child’s bedroom of blue and gold heavens !!!

Read more:
http://www.independent.co.uk/arts-entertainment/art-and-architecture/features/the-sistine-chapel-was-created-500-years-ago-by-michelangeloor-was-it-773079.html
Posted by Kelly Borsheim Artist at 2:15 AM No comments:

Occasionally, the Galleria degli Uffizi in Florence, Italy, will put on a temporary exhibit (in this case with free admission) of artworks in their collexion that are not normally on display. These are not necessarily lesser works, only works they cannot fit into their current spaces. This exhibit is titled “Il Pane Degli Angeli” or The Bread of Angels.

I met my friend Lisa outside the famous gallery and we also saw our friend Harry there. I liked several of the paintings in this fairly small exhibit and made some brief sketches, an image of which I include here. 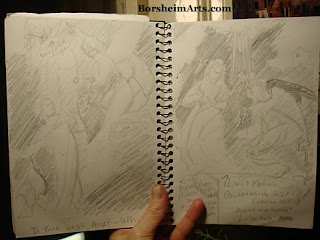 The composition on the left is from an olio su tela (oil on canvas) by Pietro Liberi (Padova 1614-Venezia 1687). She is called “Annunciazione” and was painted around 1670. I like the subtle, not quite vertical sweeping curve of the figure on the lower left. And how the angel above’s curling form lead the eye back into the lower figure. There is a wonderful diagonal that gives movement and interest with a beautiful balance of light and dark.

The sketch on the right was done from another, smaller painting with the same title. This artist is Livio Mehus (Oudenaarde 1627-Firenze 1691). It was very interesting to see the same subject handled in similar, yet different ways. It is a good reminder that although artists may influence one another (I do not know if these artists knew each other or not because I forgot to read the background information on the wall), each has his own voice.

If you find yourself in Firenze subito, go see this exhibit. She ends on 3 Febbraio. 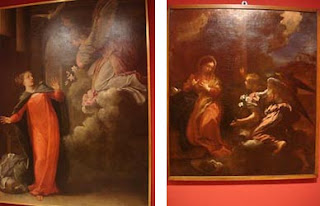