How long did it take you to make THAT?

2008 fall: "Niccolò da Uzzano":
Here I am with my charcoal drawing of a gesso (plaster) portrait sculpture. The gesso is a copy of the famous Italian sculptor Donatello's portrait of the banker of the Medici family, Niccolò da Uzzano. The original terra-cotta portrait sculpture is in the collection of the Bargello Museum in Florence, Italy.
For this project, I used the sight-size method of drawing [which means that all observations and judgements are made from about 2 meters from the art and LOTS of pacing the floor]. If you would like to learn more about sight-size, as well as see the finished artwork, click on the link below.
This work took me on average five hours, six days per week for about ten weeks. Niccolò is available for only $2600, or giclée reproductions are available for less than $500.
See the drawing process for Niccolò here:
http://www.borsheimarts.com/charcoal-drawing/2008/niccolodauzzano.htm
and check out the sizes and prices for the high quality reproductions here:
http://www.borsheimarts.com/giclee.htm 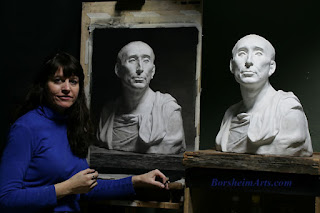 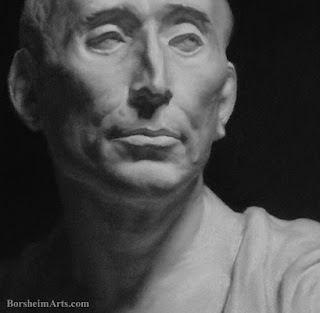 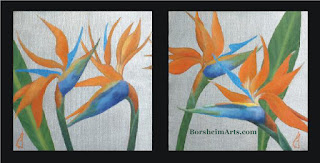 Happy, happy birthday(s) to my Aunt Nancy and my beautiful friend Kumiko Suzuki!
Thank you.

Email ThisBlogThis!Share to TwitterShare to FacebookShare to Pinterest
Labels: art, collector questions, how long did it take you to make that, productivity

Dear Art Lover,
While many of my friends are backing out of the dinner we all signed up for that raises money to restore a work of art in the Church of Carmine in the Oltarno of Florence, Italy, I still feel grateful that each one of them is a part of my life.
I feel grateful to you, too, for sharing an interest in the arts, Italy, and or just living life as fully as we can and helping others to do so, as well.  And I wish you ever more abundance in love and health and even, happiness. 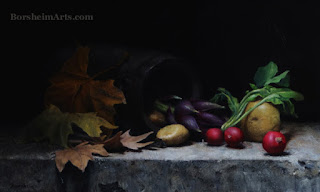 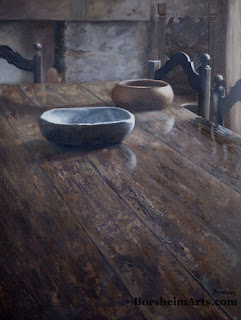 Posted by Kelly Borsheim Artist at 4:56 PM No comments: 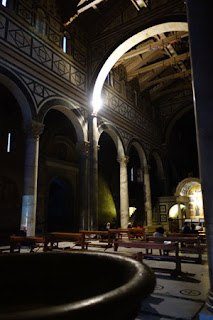 Dear Art Lover,
Saint Minas (or San Miniato in Italian) was an Armenian prince.  He served in the Roman army, which is how he found himself in Florence, Italy.  He later survived being fed to a panther [the panther’s choice apparently], in the amphitheatre (Via Torta?) at the order of the Emperer Decius, because it sucks to have a religion that is different from the prevailing masses or leadership.  This Emperor (from the years 249 to 251) later watched as Minas was beheaded.  It is said that the newly dead saint then collected his head and walked across the Arno River and up towards what is now known as the San Miniato al Monte (St. Minias on the Mountain).

The church was started around 1013 with various improvements added over the centuries.  Today the Olivetan monks still live and work there.  They still sell their own made honey, herbal teas, and famous liquers.

To learn more about San Miniato al Monte in Florence, Italy, check out these pages:
http://www.sanminiatoalmonte.it/ 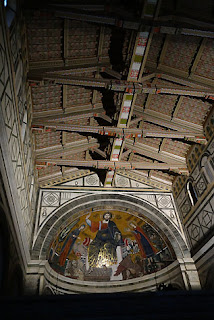 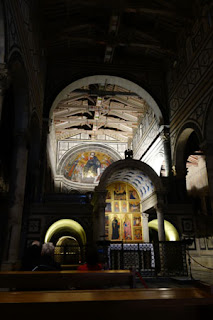 For years I had heard of the special masses in Latin in which one could go to San Miniato and hear Gregorian Chanting. I imagined many male voices singing in harmonies and I have wanted to see/hear this for years, although I tend to forget a lot or have other plans on the weekends.  However, I decided to make a point to attend one such mass before I leave Florence this time.  My friend Alessandra said she would join me.

Ale and I had met up in Piazza Santo Spirito to see friends and the antique/hand-made market that fills the square each second Sunday of the month.  Afterwards, we walked down to Porta Romana and caught Bus 12 up to the Basilica, the exit just before Piazzale Michelangelo.  I was glad that we arrived early.  The mass was to start around 5:30 and the fading light up on the hill overlooking Firenze was lovely.  We were too late to see the cemetery, which features wonderful sculptures, as well as the graves of Carlo Lorenzini [author of Pinocchio] and the artist Pietro Annigoni. 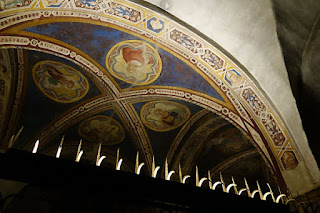 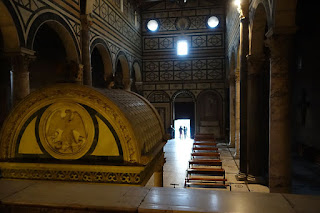 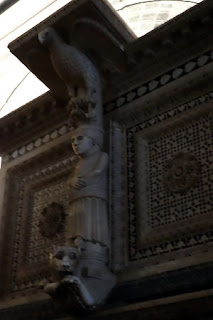 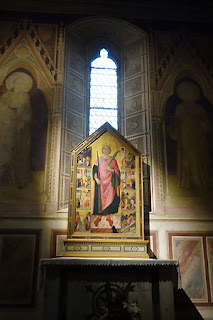 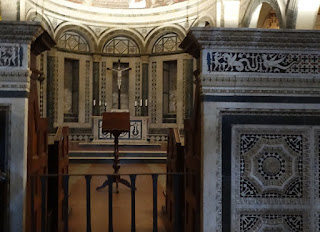 While I have been to the cemetery several times before, I had never been inside of the basilica. What a treat!  I really love the hand-carved and painted wooden beams on the ceiling, the mosaics in stone, and the sculpture and fresco.  The church goes mostly dark until someone puts a coin in a machine.  For some reason, I enjoyed being in the dark there, but I did take advantage of the light to photograph these images for you.

The views from San Miniato overlooking the Arno River and downtown Firenze are pretty good, I would say.. er, I did say! 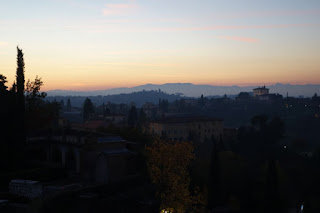 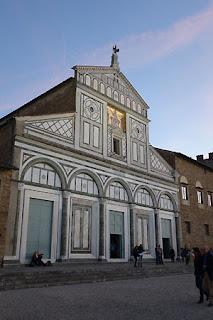 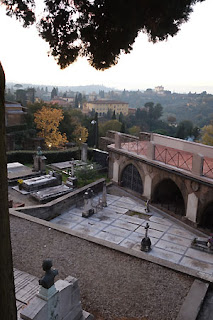 The mass did not take place in the main open area with the pews.  Instead, it was a more intimate mass at a lower level “behind” the altar you see as you enter the church.  During the mass, Ale asked me if I understood the words.  I had already forgotten that the mass was in Latin.  As a child I remember enjoying the Latin mass.  It added to the mystery (along with tons of incense and bizarre rituals).  Not understanding the words was a blessing and was a great excuse for the daydreaming I have done all of my life when expected to sit still for any length of time.  Whether the mass had been in Italian or English, I would have daydreamed through most of it.

I kept waiting for what I had come to see.  The priest was singing the mass… alone.  On occasion, a few voices in the audience joined in; sometimes I did, as well.  Then an old woman sitting to my left added her high and slightly off-key voice to the mixture.  I smiled.  I remembered going to Catholic Church as a child.  One time an old lady turned around and said to my father, “My, young man, what a lovely voice you have!”   My dad beamed:  he felt that he had been given TWO compliments with that one! 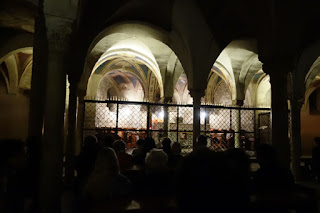 I still waited.  At some point, Ale asked me if I had heard enough.  I was unsure of how to respond, but since the money basket was being passed around, I understood the end was near.  She put some coins in and the next time the people stood up, we escaped.  Outside the mass, I apologized to her for making a mistake about which mass had the Gregorian Chants.  She looked at me in surprise.  She explained that Gregorian Chant just really means that the mass is sung and that all are welcome to join in.  Sometimes you will witness many monks singing, as I had in my head, and others, it would be just one man leading the show, as was our night out.   Hmmmm.

We walked down the hill to the Ponte alle Grazie together.  She went to meet with our friends, while I went home to continue my work.  At home, I immediately went to youtube.com and sought out Gregorian chant music videos.  It was the peace I wanted to fill the air and it was lovely, the many voices in unison.

To learn more about Gregorian Chanting, check out:
https://en.wikipedia.org/wiki/Gregorian_chant


I am not above taking a donation.  Even five bucks is a help, if you enjoy what you read about and see in my images here on this blog.  Thank you.  [You may make a donation via the PayPal links on the side bar on the blog site:  http://artbyborsheim.blogspot.com ] 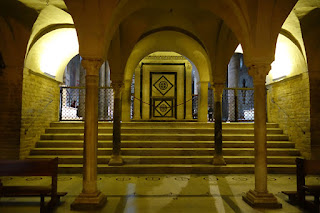 A Side Chapel inside San Miniato: 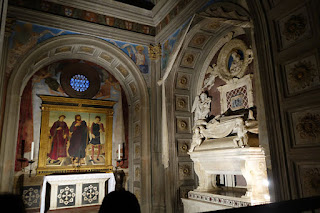 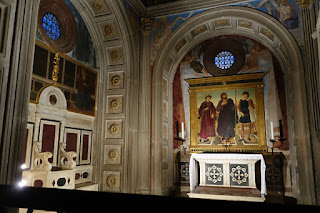 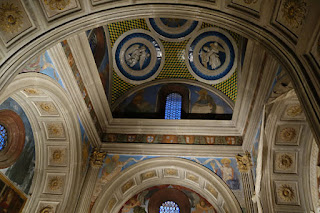 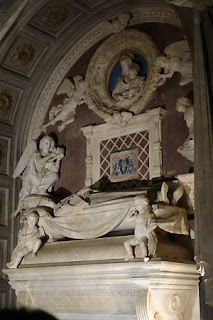