Last Thursday was my first day back after visiting a model (and friend) in Spain for about a week. My cousin Heather flew into Italy that same night that I did and we met up in Piazza Santo Spirito near my flat in Florence.

Thursday morning I loaded up my gear and Heather snapped this shot of me before she climbed back into bed for a few more snoozes. I knew that the weather was iffy, but I wanted to draw Michelangelo and chose to draw a small version of his “Creation of Man” work from the Sistine Chapel. 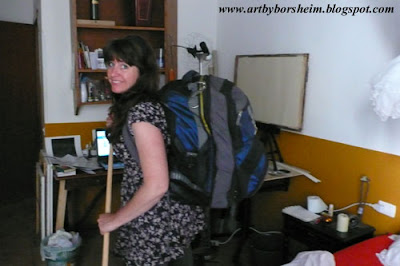 Heather arrived sometime around noon, I guess, and saw that I had drawn most of the composition in white chalk to help me see the overall proportions. And I had almost finished the face of Adam and had begun work on the focal point of the near-touching hand of man with the hand of God. It had sprinkled earlier, so I had already pulled out a sheet of plastic, but …

If it rains a little, I can usually keep working in pastels on the street. If I am limited in how much plastic or newspaper, I place it over the blank areas in which I want to draw next. Once drawn a light rain will not hurt a streetpainting unless it is touched. After the raindrops dry, the muted wet whites and light tones pop back up again. However, I cannot draw on a wet street, so it is the naked street that I prefer to protect. 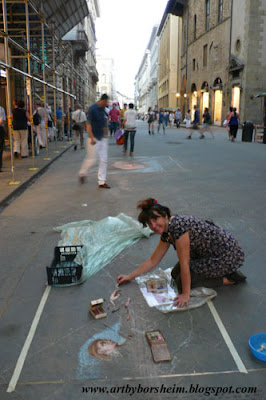 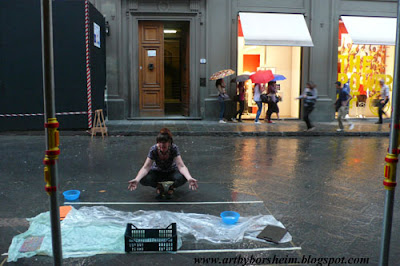 However, shortly after Heather arrived, the skies darkened significantly and the heavy drops began their descent. And then the hail came. I could not believe how large the chunks of ice were that fell from the Florentine skies in mid-June!

The day before, my colleague Kumiko had drawn Botticelli’s face of Venus. Although the street cleaner had made his pass over her work that morning, there was still plenty of pastel left to morph her face into a fleshy stream. Strange how I find beauty in some forms of destruction. 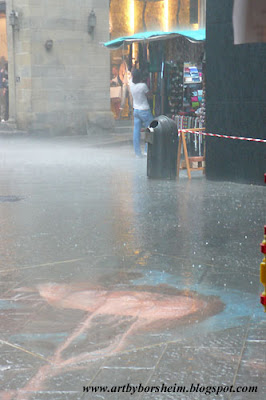 The hail and the downpour made the rest of my streetpainting day impossible. One funny thing happened though: while lots of people took shelter in a nearby hallway, I met a woman who lived – or tried to live in my room one month before I arrived there. She felt that she had to leave because the room was not up to her expectations. I laughed because I chose that room specifically because it DID live up to my expectations and needs to create art in that space. One (wo)man’s trash is another’s treasure and this day was a fun reminder of how small Florence can seem at times.

So, just because I got rained out from streetpainting, does not make it impossible to create art with pastels. If you would like to get to Hawai’i to create art in this pure pigment medium while having all of the cooking and cleaning done for you in your lodging, check out my “Pastels in Paradise” workshop on the Big Island this September. It is not too late yet! 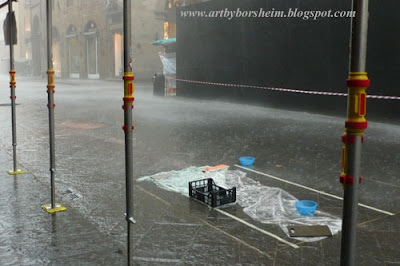 Thanks to Simone Di Santi, who interviewed me last year in Florence, Italy, while I was streetpainting. Simone and her partner create a travel video Web series called "A Road Retraveled".

Please note that near the end of the video when they are scanning the young nude Giovanni (St. John) by Caravaggio: This part of the video clip was taken AFTER the street cleaners (vehicle) passed over it the morning after it was drawn.

I knew that one day (or night, as this image depicts) I would draw this little boat parked on the far side of the famous Ponte Vecchio in Florence, Italy, over the Arno River. What a joy this project was! I am still fascinated with using black paper and have begun to apply colors (instead of my previous “white on black” series). I hope you love the look as well.

I feel honored each time someone here in Italy at my current exhibit compliments this pastel painting because it is very common to see paintings of the famous Ponte Vecchio. To have created a new take on the bridge over the Arno River is quite an accomplishment. Florence is definitely an artist’s town!

Happy Father’s Day to my own father, PJ, and to all those wonderful dads out there.