Michelangelo and Mapplethorpe a Florence, Italy 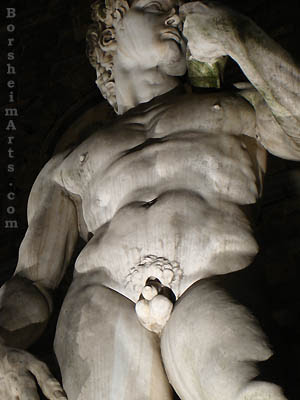 Two big “M”s – Michelangelo and Mapplethorpe (Robert, that is) together at last in Florence, Italy. I cannot wait for May (oh – that is another M) 25th!
La "Perfezione nella Forma" is an exhibit of 91 of the famous (late) photographers work on exhibit with the (also late) sculptor’s oeuvre at the Galleria dell'Accademia here in Florence, Italy. Artist (and friend of Robert Mapplethorpe) Patti Smith helped select the Mapplethorpe images to be shown.

The Galleria is where Michelangelo’s original stone carving “David” is on permanent display, as well as his unfinished slaves (fantastic, davvero!).

If you have any plans on visiting the Renaissance City, you might want to do so this summer.
The exhibit starts 25 May 2009 and runs through 27 September 2009.

Two great artists together and more to see at the Accademia!
Cannot wait!

Posted by Kelly Borsheim Artist at 9:33 PM No comments:

I thought I would take advantage of an opportunity that came my way recently. I was sent an e-mail inviting me to submit my responses to an online interview.
Check it out here:

Now, would you just look at this cloud over San Niccolò and the Arno River in Florence, Italy? I mean – good grief. It looks like a puffy BEAST! Incredible!

And as much as I need a new camera (without dirt inside the lens), I am grateful I was able snap this shot. Last week when I wanted to take a photo of a drawing I had done before I loaded her up on my bike, the lens would not open at all. Later that evening I heard my name being called out and saw Hélène and Kieran starting dinner outdoors at a café. I now tease Kieran (gratefully) that ever since he touched my camera it began working as normal again. Still, it is just a matter of time now . . . 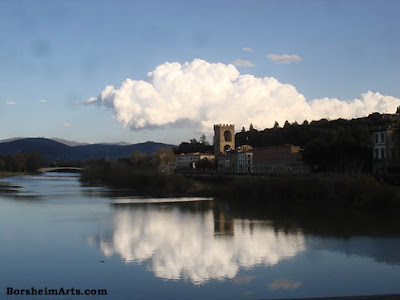 This is a continuation of yesterday’s blog entry about the Colorist Method of applying pastels to a drawing.

OK, in my last entry you saw that I put warm colors (reds, oranges, and yellows) into the light shapes of my disegno and cool pastel colors (greens, blues, and purples) into my shadow shapes.

Now, I am ready for the next step. That is, trying to put in more "accurate" colors into each shape. I put the word “accurate” in quotes because this is actually a subjective term and up to the artist to decide. Here in today’s first image, you may see that I have started with the angel’s wing and have begun to add blues to the face. Based on my experiences painting in the streets of Florence, Italy, I have learned that I do not want to fill-in the shape entirely. Instead, I prefer to use big scratchy type of strokes that allows plenty of the color underneath to have its day in the sun. (You can tell I used my right hand this time; see the direxions of the strokes?) I also know from street experience that I will turn this nasty look into something more refined once I blend the pastels. 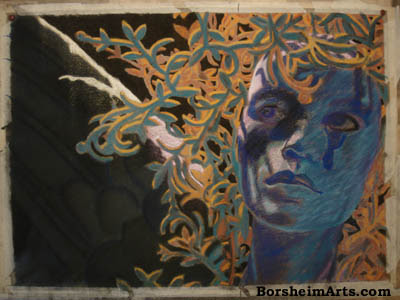 In this second photo, you can see that I have now blended the face. And, of course, I see all of my horrible shape errors. Those facial features are so off! And just like street painting, blogging about my works-in-process is like hanging my dirty undies out over a busy street. 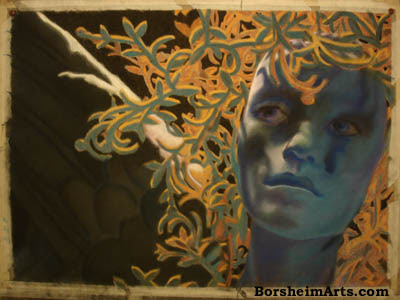 I worked all day again today until late afternoon when I headed to Zecchi’s Art Supply to buy some specific pastel colors before I went to draw at my Open Studio tonight.

I must prepare for my exhibit’s publicity and invitations, so please bear with me as I get past my press deadline soon.
Thanks and thanks for reading!

The first time I worked with pastels was in the streets of Florence, Italy, as a street painter. Everything about it, it seemed, was new: working large and flat, working with chalk, working with color, and a very different type of physicality as compared to carving stone. I am still not sure what I think of my work as one of the madonnari.

However, I meet interesting people and some fans. One is our newest street painter, a young woman of about twenty. One night she told me that what she liked best about my work is that I am “all over the map.” Doh! And I thought that I had found my voice years ago. Also, all art marketing and business gurus will tell you that Picasso was the exception. A professional artist cannot do too many kinds of art to survive and be taken seriously. And I am no Picasso (I am generally happy about that.)

So, here I am preparing new art for my exhibition here in mid-April, and EXPERIMENTING. Wait, I do not have time for that! This is a SOLO show. I must fill that space with only my work. Am I TRYING to sabotage my career? Hmmmmm. No, My theme is light emerging from darkness. And I want to explore this as thoroughly as one artist can in a short period of time.

Anyway, I recently read an article on EmptyEasel.com titled The Colorist Method of Painting with Pastels (A Four Stage Tutorial) by Robert Sloan

Following this pastel drawing method loosely (I seem to have a difficult time following rules), I created my disegno (drawing/design) in charcoal on a piece of Roma paper that is about 46 x 64 cm. 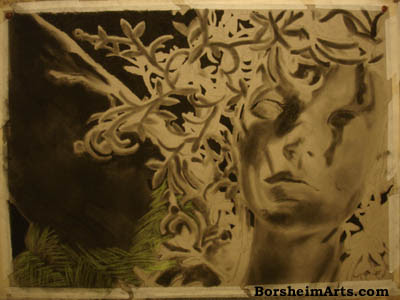 The first step in this pastel lesson is to place different warm colors in the light shapes, while different cold colors should be put into the shadow shapes. I was pretty straightforward on how I color-coded my design, only adding a darker purple in the darker shadows of the face and a lighter purple for the face in shadow.

No doubt this will be one of my projects in which some of my collectors will love while others will say, “Please stop this and go back to what you are good at.” I wonder what I will think?

Allora, if you are curious about some of my street paintings here in Florence, Italy, just skim this blog from the very beginning September 2007. Or befriend me on Facebook – I have a photo album there of some of my work on Via Calimala. 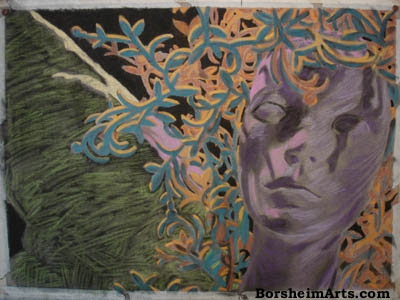 After yesterday’s post you may have wondered why I would not do without my bicycle in Florence, given a choice. So, I thought I would include today some of my favorite positive images of bicycles in Florence. 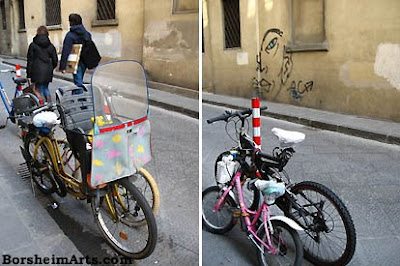 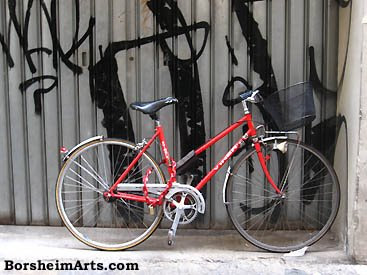 I do love the way people use their bici. I enjoy the businessmen with their briefcases strapped to the rack over the back tire, or more often over the front. Mothers who can put one child in front of the handlebars, while another baby sits behind the driver impress me (see image of the yellow bike). I have also seen a combination of the two – a businessman traveling with his briefcase AND his child on the bicycle. 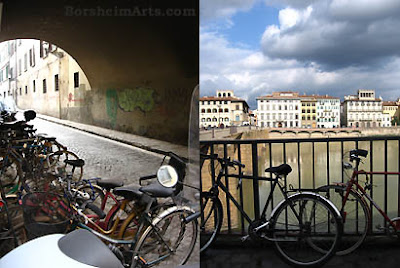 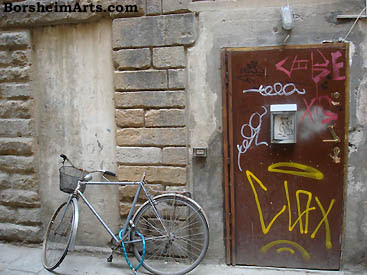 And I love the stylin’ ladies. Great clothes in all colors and styles – and those Italian spiked shoes on a bike – Mamma Mia!

I enjoy seeing the little kid bikes and I like being able to travel faster than I can on foot. I also cherish how much STUFF I can carry with my bike. Most of all, I love the way friends ride together on the same bike. It is carefree and charming. 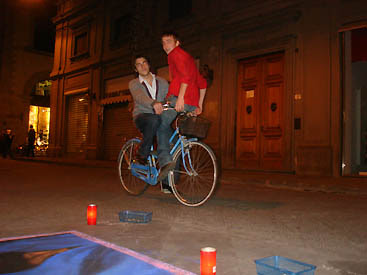 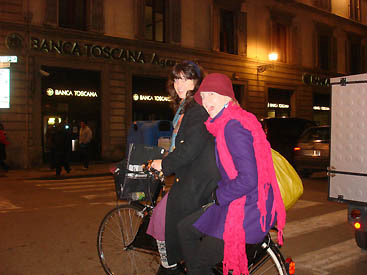 The Perils of Bike Riding in Florence Italy

If you have dropped in on this blog often enough, you will know that I love having the use of my friend Hafiza’s bicycle while I am living here in Florence, Italy. However, there are times . . .

As a pedestrian I must confess that I prefer to walk in the streets of central Florence. Maybe it is because the center of the strada is the most open space between Medieval stone buildings. Maybe there are fewer obstacles for a more carefree and daydreaming way of walking. Or it could be that the sidewalks tend to have little doggy (and sometimes people) “landmines” decorating them.

But as a bicyclist, I often feel frustrated at having to share the road with oblivious pedestrians. I mean – I MUST use the street, right? Some days are truly an obstacle course, and dangerous because people seem to change their minds about their courses or are suddenly attracted to some store window and turn right in front of another person.

Then there are the times in which a car stalls on these narrow streets – or wishes to parallel park and time stands still while horns honk away. (Do all city people lay on the noise so easily? Ouch!) THEN I do ride or walk my bike on the sidewalk. 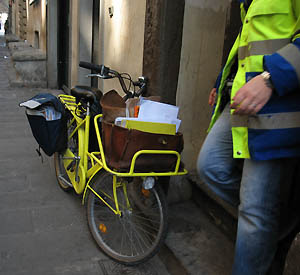 In central Florence, car access is limited. The postal carriers all use yellow bikes with matching outfits, as seen in my snapshot here. Along the Arno River, the main Viale (the big road that follows the long extinct wall around Florence), and outskirts of centro, there are bike paths along the roads or on parts of the sidewalk. They are painted red with an occasional white bike icon marking the space. I have taken a few images of times when I was blocked from the road made for me (the cyclist) by cars parking rather blatantly in this space. Hmmmm. 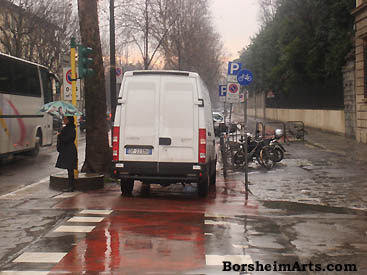 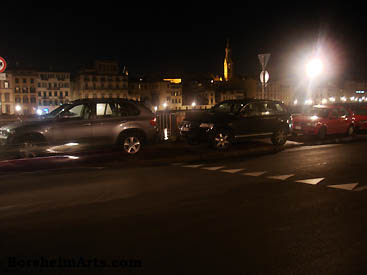 Then there are the parking issues and thriving bike theft businesses. Any bicycle left in the same spot for more than about two days is destined for trouble, if it is still there at all once the owner returns. Florence does not have enough bike racks. And pedestrians take ownership of their sidewalks by doing such forgiving acts as slashing tires of bikes parked on a sidewalk and, in my case one time, picking up the entire locked bicycle and placing it on top of a trash bin. How do you like how one cyclist solved his parking problem? I took this image behind the Church of Santo Spirito. 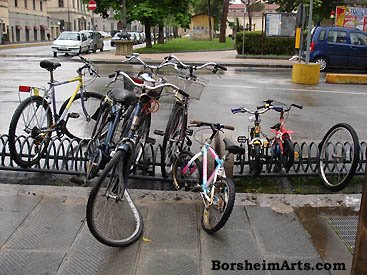 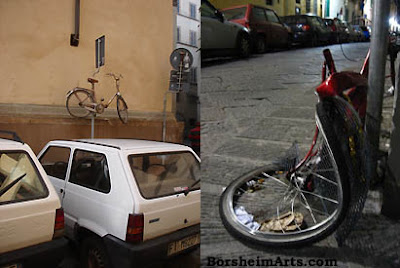 This last image was taken after a friend told me about a nearby street that had fallen victim to an arsonist who had been vandalizing Florence in May of 2008. He was caught. 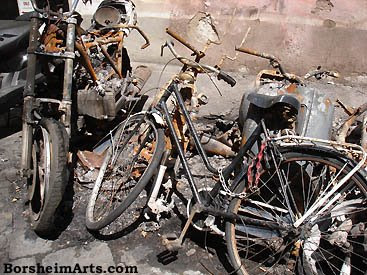 But I must admit that I had my most unpleasant biking experience last week. Wednesday night on my way to my friend Skye's flat for dinner, I was riding my bike near the Pitti Palace when a woman opened her car door suddenly before me. I think we both heard my scream right before the THUMP. Hafiza's bike did not make contact with the car door, so the bike and the car were fine, but my right shoulder took a beating that I have not had since my skateboarding accident in 1995. I am not sure why I felt so embarrassed to be hurt, but there it was. I was late to Skye’s place.
She had a bag of frozen peas for my injury, but I am still typing in pain and swelling.