Last Monday night we madonnari (street painters) had a meeting to decide on a course of action because as of 1 October, we entered a new quarter and paying the street art tax to the Commune is a problem. Anyway, although it was said that by the Italian Constitution, the police cannot stop us from creating art in the street, our choice was that if any one of us received a multa (a fine), then we would notify each other and fight it. This was more political than I wanted to be in bella Italia, but I agreed with the rest of my colleagues. Still, I was glad that when I arrived for my scheduled Thursday, I learned that the taxes have been paid for October and I can work legally this month.

So, all that done with for the moment, I chose to attempt a Bouguereau for my street painting. William Bouguereau’s art is difficult because of its subtleties. There is a definite form to his figures, but where exactly do I distinguish what is light and what is shadow? It is so easy to copy a Bouguereau with too much contrast. 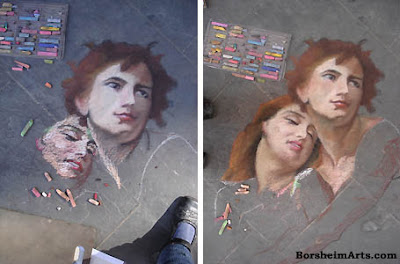 I love this image of the famous French artist: Le Ravissement de Psyche (1895). Yes, I lack subtlety. And I never did get the boy’s left eye dark enough to turn and properly be in shadow. This is the definition of stupidity – knowing what to do and not doing it. Doh! But, most people tell me that I am not so kind. Ha ha.

I include this one image on the left of the two figures because it shows very well the condition of the street on which I am working. Do you see the holes and stains in the section that will become the young man’s body? Also, you can see that I began to run out of my skin tone pastels. The male figure is more orange. (I was also running out of my blues and purple pastels.) 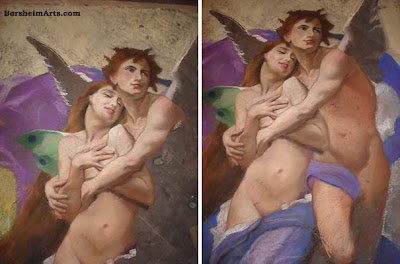 In addition, I was really tired by this time of night – street painting is very physical. The line/tone/shape of the inguinal ligament (from the hip to the top of the pubic bone) is wrong. It is too dark for too large a shape and also is too close to the center of body.

I also met two very interesting people in the art field that day. There was some sort of convention or meeting for people in the field of restoration and preservation and I spoke with a man from The Netherlands. He was very admiring of my work and hinted at an invitation to The Netherlands some time. And he told me that I was wasting my time working on the street since the art is not permanent. That is sweet, but not really what I wish to hear when I have about six more hours of street labor that day ;-)

The other art professional I met was an art historian at a university in Milan. We spoke for quite a bit, with her showing me a book on contemporary artists. She said that she rarely stops to really look at the work of the madonnari, but something in my drawing made her get off her bicycle.

So, last Thursday was a good day. I washed my drawing about 1 a.m. and rode my bike home. I was surprised that Claudio, the head of the madonnari organization was still drawing away into the morning when I left! Artists must be a little bit crazy, do you not agree? 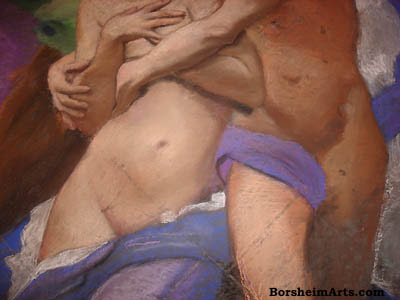 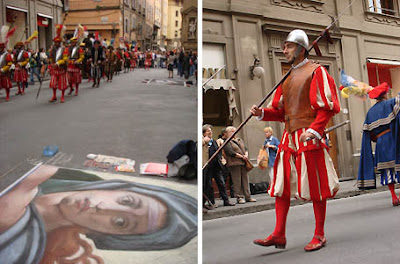 The Friday night before (September 26), Giovanni (another madonnaro [street painter] – from Brasil) and I left up little cardboard tents in an attempt to persuade the street cleaner in Florence, Italy, not to drive over our street art. Did not work, or maybe it did. I only had one large tire print over my face of a sibyl of Michelangelo’s Sistine Chapel.

So, Saturday’s work was not so bad. I just added more pastels and tried to feminize the face once more. And then I added hair and background. 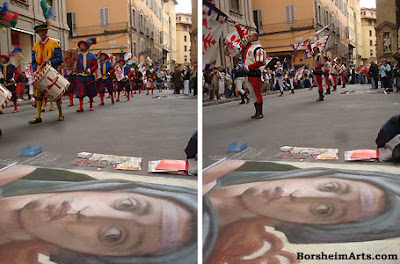 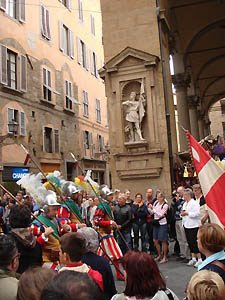 I knew that my friend Martinho, a bandieri (flag waver), was performing on this day, but I had no idea that the parade would pass right by me on Via Calimala! How exciting this was, even if I did not get to see their performances in Piazza della Repubblica or the Duomo or in Piazza della Signoria. Gotta love the costumes and men in tights ;-)

By the time I finished in the night, I was exhausted. I had street painted Monday, Wednesday, Friday, and Saturday. And I was scheduled for Monday again.
I finished out the composition in the street and even added the subtle cracks that now appear on the original fresco of the Sistine Chapel. How could Michelangelo have anticipated such beautiful wreckage? 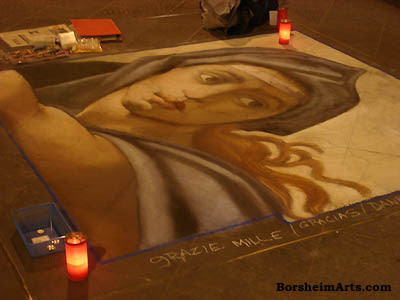 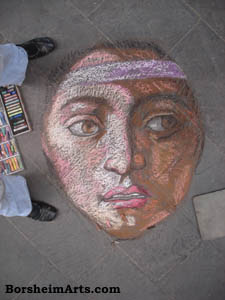 Because other madonnari (street painting artists) are on holiday now, I was able to buy two days in the same spot for making my drawing the last week in September – a Friday and a Saturday here in Florence, Italy. I have not drawn on such active days, people-wise, before, so this was a treat.

I chose to paint Michelangelo’s Delphic Sibyl from the “Cappella Sistina” in Vatican City, Italy. Not being much of a morning person, I started around noon and got a decent start on the portrait drawing. I scratched into the street layers of pastel colors and I am trying to learn to do it in interesting and creative ways. Later, I blended everything with my hands (now raw and very dry: missing my fingerprints even).

Here you see that I am drawing with Carmen and her little brother Vincent: Americans who now live in Korea. Their parents took this image. 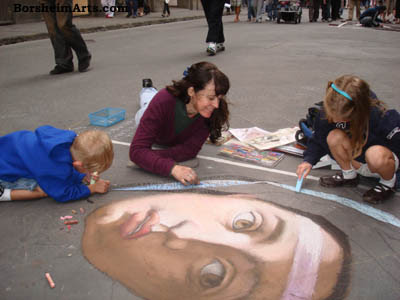 An interesting thing happened that evening – well a horrible thing for me. Somehow after this night shot was taken, I managed to use my last 30 minutes of working to make the face of the sibyl masculine! Mamma mia! It was horrible. I could see the problem when I photographed it, but in person the street painting did not look so bad. Still . . . the photographs would be all that would remain. Ugh! 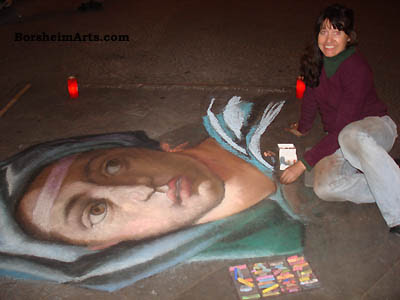 Many years ago, I did a quick life sketch in paint of a rather boyish looking woman, Eugenia. One of my collectors said, “I love this painting, but can you make me another in which the face is the same, only as a feminine-looking boy?” Whoa! What an interesting proposal! Well, I began to study more images of people to determine what made a masculine vs. a feminine face. This task was more difficult than it sounds. Per esempio, one normally thinks of a tapered jawline as being a feminine trait, yet I saw many faces of young men with tapered jaws who looked more masculine than feminine, despite their youth. Allora, what to do?

Anyway, I finished my commission (“Eugene”) to the satisfaction of my collector and yes, the original painting is still available ;-)), but on this night in Florence, I was frustrated that I could not pin down my error. I later studied my photos and was able to grasp better how (and when/why) my circular face became more angular and masculine. Thank goodness the street cleaner passed over this the next morning, so I could attempt to mend my artistic ways. 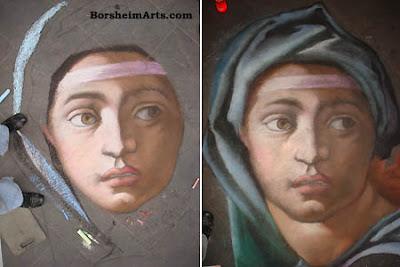 Posted by Kelly Borsheim Artist at 1:15 AM No comments: