On the 18th I started a new charcoal drawing of an Italian model named Valentina. She is a lovely girl, and I think a bit exotic looking. She is in a standing pose, with her left hand on her hip, while her right extends out to her front and side and rests on a short easel. I chose the back view of her because I love the dramatic lighting contrast. That said, I have also started a pencil sketch from the other side of the room, so that I can have more fun.

In this first collexion of images, you can see my quick gesture sketch. Here I work out my disegno in a small scale and decide how to create my image using “C” and “S” curves. Although I hope that I am getting better at sketching proportion without measuring, my goal at this stage is to make my choices before I start the actual drawing.

The middle image was taken of my 60-centimeter outline sketch of the figure. She has been given romance and architecture (curves for interest; straight lines for strength). In the image on your right, you can see that I have also outlined the shapes of the shadows. 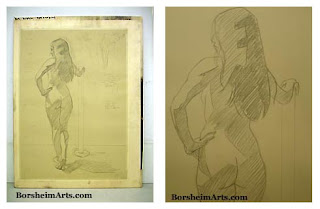 In the second row of images, I have now colored in the shadow shapes, so that I may refine my shapes and design. I have also gone one step further by delineating the separate shape of the darkest darks in the model’s hair. In the close-up image (right), you may see what I am doing a little easier. Also, some of my mistakes are apparent, such as the upper right arm being too thin.

But, onward through the fog . . .
Posted by Kelly Borsheim Artist at 9:11 PM No comments: 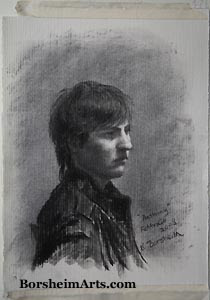 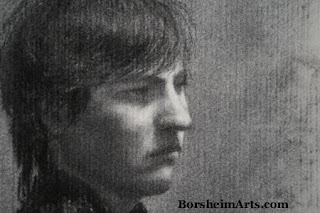 As I may have mentioned before, I feel weak in the area of portraiture and want to improve this. Several of my artists friends and I model for each other to help us in our drawing of faces. Anthony (pronounced “Ant – ton- ee”) was the latest sitter. Here you will see my finished drawing in charcoal, as well as steps in the process. 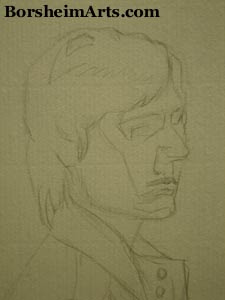 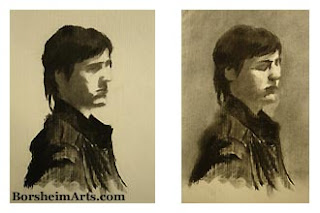 It should be apparent that after my initial drawing on the Roma paper, my shapes are wrong. I try to correct them in the outline stage because it is much easier to move a line than an area of tone. But once I have my tonal drawing, my errors become more evident.
In this case, I felt that I had a decent likeness in line, but once I filled in the shapes with carboncino, I lost something. But redrawing is an intellectual pleasure!

I hope you enjoy this portrait. This one took me about 6 hours to accomplish, for those interested in such things. Of course, this does not take into account how much training I have been doing to be able to create a drawing! One foot in front of the other . . .
Posted by Kelly Borsheim Artist at 1:04 PM 2 comments:

On my way out the door tonight to get some printouts made from some digital files, my friend Simone called. He met me and we ended up at the Edison (English-speaking) Bookstore café near Piazza della Repubblica. After a very funny conversation about what he would like to do with the rest of his life, I saw my new Italian friend Rita. I met Rita this Sunday as she joined Lisa and me at the herb market. Rita introduced me to her friend Donatella, who restores paintings in Prato. So, what a fun and unexpected joy tonight was.

However, I digress. Because of my short time at home tonight before I return to my late night drawing, I will do a blatant marketing plea:
Please check out and buy my photos online at:
http://www.istockphoto.com/borsheim

Currently I have received 2493 downloads of my images of Italy, food, Austin, Texas, Paris, homes, and more. I am SOoooooo close to the next level of 2500, that I thought I would enlist your help. These images have limited rights granted with each purchase, but the prices cannot be beat. Also, the photo experts at istockphoto.com have inspected each of my 434 images, so you will not be disappointed by the print or screen quality.

Besides the sales of my fine art, selling my images through http://www.istockphoto.com/borsheim helps me to keep working in Florence, Italy, and improving my skills.

And THANK YOU SO MUCH! 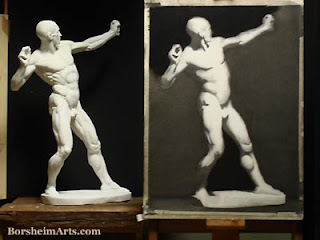 I thought I might give you an update on the progress of my cast drawing – what I call the “Flaming Archer.” OK yes, bows today are getting much easier to draw by using various pulley systems and other technology. But if you have ever even held a bow, you would know that you do not hold your pulling hand in that manner! The string is not so easily plucked, especially during the times when this écorché would have been created. But then, maybe this flayed man really was that strong ;-)

Ok, back to the business of art: I last showed you my setup on
2 Febbraio 2008. I had done my basic drawing (cartoon) with shadow shapes designed on an inexpensive piece of drawing paper. After I was satisfied with my choices, I transferred the drawing to a quality piece of paper that accepts charcoal well.

This first image here was taken on 4 Febbraio. Normally, my transfer would only include two tones: the white of the paper and darks (all grouped together with an average value of tone). However, because my background is so much darker than the rest, I chose to start with three tones: white, the figure in shadow, and background. Only, I forgot to photograph that stage. What you see here is the beginning of my going over the darks of the background to make them darker.

For this project, I am trying a new paper. The folks at Zecchi Belle Arti e Restauro simply refer to this paper as “fake Roma.” It is made here in Florence, Italy, and looks a lot like the Roma paper, but is whiter, giving me the possibility of a greater tonal range. I am also trying to push the blacks. Normally for the darkest darks, I use a compressed charcoal (bought in the States, since it is different there from the compressed charcoal one can buy here in Italia). But I am also using a Rembrandt pastel (at the top, above the head). Rembrandt’s black is richer and darker than the compressed charcoal, giving me a greater range of blacks. Although the background may look solid black in these photos, it is not. For example, the figure casts a shadow onto the background that is even darker than the black background.

So, I scrub the blacks into the paper hard, sometimes sponging them off and hoping for some consistent texture and coverage in the process. You can also see that my original drawing is getting blurred, so it is a good thing I know how to draw! But seriously, this loss is not important, since in the stage of Big Form Modeling, I will be toning down the edges as I round the figure. 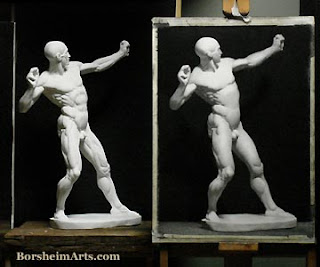 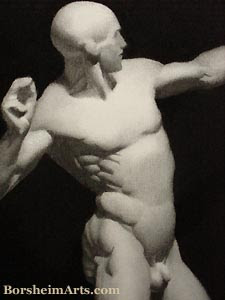 The next two images were taken on the 14th of February. I have begun to create the illusion of three dimensions by applying concepts of Big Form Modeling and also, I have begun to work the shadows a bit. I am also correcting many of my shape mistakes, although I have yet to fix that too-large receding hand or the shape of the base. And today, I finally realized that the shadow shape of the neck is wrong, so . . .

Big Form Modeling gives me a context for the rest of the tones in the image. Ideally, if I do this correctly, the figure will look almost done – and 3-d – before I have even added any details. Draw on . . .
Posted by Kelly Borsheim Artist at 11:43 PM 1 comment:

On the weekends, I try so hard to finish many projects that I have begun in the work week. Today, I sprayed my latest charcoal drawing with fixative and then photographed him.
I would like to share with you “Francesco, 13 Febbraio 2008” This drawing is really about the shapes of a male model’s hands. I have always loved drawing hands, which most artists know are very difficult to portray with emotion. 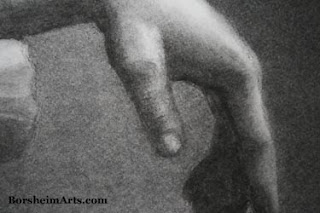 I was pleased that the model Francesco also liked the drawing. This charcoal measures 15 x 60 cm (about 6 x 24 inches) and is on a heavy watercolor paper. I really enjoy this elongated proportion and it is my hope to bring attention to the lovely form and tones in a specific part of the human body, in this case, the hands. And I have always loved the soft qualities of black and white.

This original charcoal drawing from life is SOLD 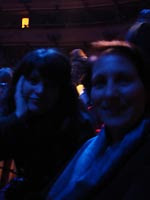 My friend Marina arranged to secure tickets to SLAVA'S SNOWSHOW – messa in scena di Slava Polunin at Teatro Verdi for a bunch of our artist friends here in Firenze. She promoted the show as “Russian mime” knowing that I “have a thing” for all things Russian or Ukrainian (especially the language and vodka!). The Teatro Verdi pubblicità states that “Slava Polunin è considerato ‘il miglior clown del mondo.’” (Slave Polunin is considered the best clown in the world.) Even artist Jered teased me, “You are willing to pay to see a mime?” Apparently so. 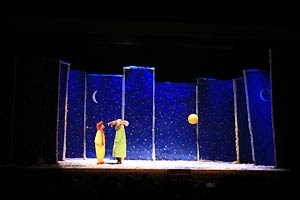 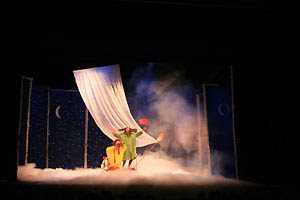 But the show was not anything I had expected (no white faces or a man trying to find his way out of a box). It was truly wonderful and fun and human. Marina told me that I would be happy with the expressiveness of the performers. And for me, another charmer was hearing the children’s laughing voices in the audience mixed with the grownups, even though the show began at 20:45.

Teatro Verdi is a beautiful theatre and very close to where I live in Florence, Italy. I saw the “Gala Nureyev” there last year. These Slavic performers last night were not only expressive and the music perfect, but there was a lot of interaction with the audience. At one point, a giant blanket of spider webs was passed over the entire floor of the theatre as members of the audience helped to propel the huge fabric over our heads towards the back of the theatre. Confetti was everywhere and the air festive. We all had great fun. 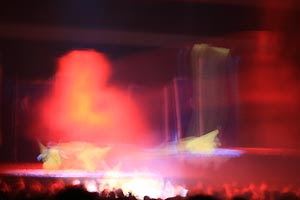 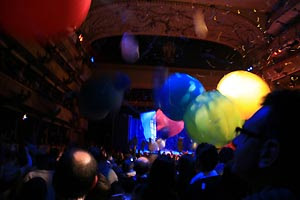 The images from my camera that I post here were taken by me, except for the one that our friend Richard took of Lisa and me before the performance began. Perhaps you can have some idea of the energy inside Teatro Verdi. At the end of the performances, giant balloons were released into the air space in the crowds. For a moment of was reminded of the TV show “The Prisoner” (“I am NOT a number!”), except that these giant spheres were of many colors and in greater quantity. Later smaller, but still large spheres were also bouncing around as children and adults alike tried to pat them and keep the motions going. And, of course, it rained confetti. Fantastic! 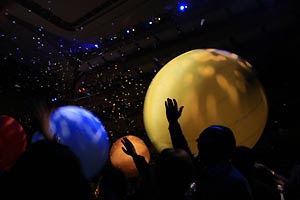 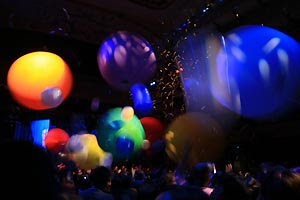 Posted by Kelly Borsheim Artist at 12:24 PM No comments: